Stella Zhu : Unlocking Your Games’ Global Potential with the Power of Interactive Ads

The COVID-19 pandemic is impacting countries around the world, forcing users to stay home and play games. In order to contain the spread of COVID-19, Antonio Decaro, Mayor of Bari, Italy, even took to the streets and told his residents: “Go home, you can’t play ping pong, go to your PlayStations!” This massive influx of players has opened many new opportunities to run new customer acquisition campaigns for game publishers and developers going abroad.

How can game developers use ad creatives to acquire high-quality users given the COVID-19 pandemic? What kind of challenges that advertisers are facing can be solved with creative solutions? Given the current industry trends, what are the most effective strategies to use when advertising in the global market? Stella Zhu, the head of Mintegral’s creative studio, Mindworks, answered these questions in a recent interview with AdExchanger.cn. The Mindworks Creative Lab, officially launched in March 2019, is Mintegral’s in-house creative studio. The studio focuses on crafting high-quality interactive ads and creative videos for advertisers to provide exceptional ad experiences and to increase the effectiveness of their clients’ marketing campaigns.

According to Stella, the coronavirus pandemic forcing people to stay home has resulted in an increase in time spent on mobile devices, games in particular. As a result, users now have higher expectations for the ad creatives they see.

Using the same creatives repeatedly again can become dull and will make it difficult to capture the audience’s attention in the long term. That’s why games to keep innovating their ad creatives to boost their growth and find global success. Therefore, playable ads with high engagement and conversion rates have become the ad formats most suitable to meet advertisers’ demands.

What is a “playable ad”? Put simply; it’s basically a mini-game. Users get to quickly experience the gameplay by trying out this type of ad that can last from 10 to 30 seconds before downloading the actual game.

“In this fierce competition for traffic and user attention, it is hard to achieve efficient conversion and user growth levels by simply stacking video ads. This is why interactive ads are becoming increasingly important in user acquisition,” Stella pointed out. 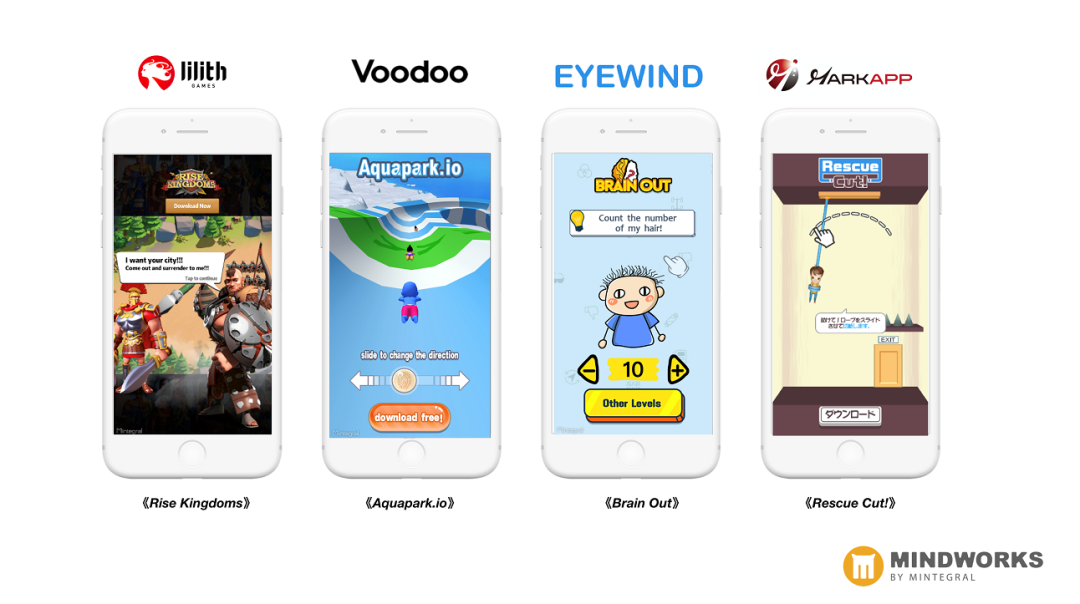 Thanks to Mintegral’s highly precise programmatic advertising technology, interactive ad creatives can be dynamically optimized down to the smallest element by using the abundant interactive data available. According to Mintegral’s internal data, interactive ads have shown greater potential than standard video ads in terms of overall user acquisition efficiency.

82% of interactive ads’ IVR (install per impression rate) is higher compared to regular video ads across the entire UA campaign cycle. Across the main promotion geos like China, the US, and Europe, the overall IVR improved by interactive ads is over 40% on average; in Japan, South Korea, and Southeast Asia, that number skyrockets to over 85%.

2. Playable ads can stimulate a new round of user growth in the middle and later acquisition stages for games

In the middle and later stages of the campaign, the effectiveness of common ad creatives might decline significantly due to competing products or user growth bottlenecks. However, playable ads can be dynamically optimized to provide personalized interactive user experiences and encourage new users to download the game, leading to a new cycle of user growth. 3. Interactive ads are an effective way to improve retention rates

Reports say that 75% of the global ad campaigns have started to implement and use interactive ads. With nearly 50% impressions among all types of ad formats, interactive ads can generate almost 70% of total installs.

How can technology and data improve ad creative effectiveness?

Advertising businesses including tech giants like Google and Facebook have been severely hit by the pandemic. Advertisers have reduced their budgets and increased campaign effectiveness requirements, and game advertisers have done the same.

However, gaming publishers who want to promote their games in the global market are likely to waste their ad budgets due to their limited understanding of other markets. On the one hand, since it is virtually impossible for them to set up research teams in each target market, there will be a lack of regional user data at their disposal, making it difficult to understand user preferences. On the other hand, without a precise advertising strategy, it is very challenging to properly monitor and maintain the effectiveness of all ad creatives at the same time.

“Based on the data generated from our interactive ad campaigns, Mindworks can provide advertisers going global with valuable insights into regional user behavior and help them better understand their audiences,” said Stella.

In addition, Mindworks can boost the campaign value for advertisers looking to go global by combining interactive creatives with algorithms and data to constantly iterate on those creatives and run real-time optimization efforts to satisfy users’ highly personalized needs.

Automated ad creative technology is designed to meet highly personalized user preferences in a target market and improve the effectiveness of advertisers’ campaigns.

“Let me try to explain this more simply. Basically, we break the playable ad down to its smallest elements. Through our one-stop personalization platform, we can create multiple sets of materials by adjusting and optimizing various elements with a single click. Each set of creatives is also localized for multiple regions and when the campaign is launched, the relevant localized creatives will be shown automatically based on which region the campaign is running in, thus solving issues like creative effectiveness, costs, and localization, all at the same time,” Stella said.

Stella believes that “optimizing advertisers’ campaigns by using highly granular ad creative data is finding relative certainty in a market full of ambiguity, especially when the competition for traffic is increasingly fierce.”

There are two major ways to optimize interactive ads. One is to implement brand-new creative ideas for an overall ad optimization, and the other is to dynamically optimize the interactive ads’ individual elements.

According to Mindworks data, 60% of ad campaigns changed the entire playable creatives and saw a positive impact, while 40% of campaigns chose to optimize one or more ad creative elements such as the theme, UI design, ad duration, and gameplay difficulty to reach different users and generate a positive ROI. While it’s true that changing the entire ad creative can lead to positive returns, this might not always be the most cost-effective solution for all advertisers. This is why optimizing one or more elements is a viable alternative that can achieve significant success for significantly less effort.

“Interactive ads and playable ads, in particular, created by the Mindworks Creative Studio play a crucial role in improving user acquisition results. This is also the secret to Mintegral’s rapid growth and continued trust from advertisers. We will continue to refine our creative products and services and we will strive to provide our clients with the best customer acquisition results for a better, more effective use of their budget. By using optimization down to the most granular levels, we can ensure that every penny spent by advertisers will achieve the best results,” Stella said.

Scan the QR code with WeChat
Forward the article to Moments

Continue reading...
Back to all

Creative Strategies to Get UA Right for Your Hyper-Casual Games

Still Producing Ad Creatives from Scratch? We Might Have an Alternative